Horton hears a Who
(Blu-ray) 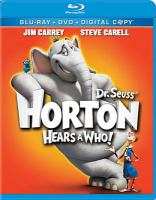 General Note
This Blu-ray disc requires a Blu-ray player will not play in standard DVD players.
General Note
Blu-ray disc ; High definition.
General Note
Title from disc.
General Note
Based upon the book by Dr. Seuss.
General Note
Special features: audio commentary with directors Jimmy Hayward and Steve Martino ; all new Ice age short: Surviving Sid ; sneak peak of Ice Age 3 ; picture-in-picture bonus view: watch Horton hears a Who! with a Who ; deleted footage and animation screen tests ; Bringing the characters to life featurette ; That's one big elephant: animating Horton featurette ; Meet Katie featurette ; Bringing Seuss to screen featurette ; The elephant in the room: Jim Carrey featurette ; A person is a person: a universal message featurette ; Our speck: where do we fit i? featurette ; Elephant fun: the facts featurette ; We are here! game.
Creation/Production Credits
Music, John Powell.
Participants/Performers
Voices: Jim Carrey, Steve Carell, Will Arnett, Isla Fisher, Amy Poehler.
Description
One day, Horton the elephant hears a cry for help coming from a speck of dust. Even though he can't see anyone on the speck, he decides to help it. Good thing since as it turns out since the speck of dust is home to the Whos, who live in their city of Whoville. Horton agrees to help protect the Whos and their home. Unfortunately for Horton, this gives him nothing but torment from his neighbors. They refuse to believe that anything could survive on the speck. Still, Horton stands by the motto that, "After all, a person is a person, no matter how small."
Target Audience
MPAA rating: G.
System Details
Blu-ray ; Dolby Digital 5.1 surround, Dolby Digital surround, 1080p High Definition.
System Details
This Blu-ray disc will not play in standard DVD players.
Language
English (Dolby 5.1), French (5.1 Dolby surround) or Spanish (5.1 Dolby surround) ; Cantonese, English, Korean, Mandarin or Spanish subtitles; closed-captioned (English SDH).